The Atlas moth (Attacus atlas) is a large saturniid moth found in the tropical and subtropical forests of Southeast Asia, southern China, common across the Malay archipelago, Thailand to Indonesia.
In India, Atlas moths are cultivated for their silk in a non-commercial capacity; unlike that produced by the related Silkworm moth ( Bombyx mori ), Atlas moth silk is secreted as broken strands. This brown, wool like silk is thought to have greater durability and is known as fagara. Atlas moth cocoons have been employed as purses in Taiwan.
Atlas moths are considered to be the largest moths in the world in terms of total wing surface area (upwards of c. 400 square cm or 65 square inches). Their wingspans are also amongst the largest, from 25-30 cm (10-12 inches). Females are appreciably larger and heavier.

Atlas moths are said to be named after either the Titan of Greek mythology, or their map-like wing patterns. In Hong Kong the Cantonese name translates as "snake’s head moth", referring to apical extension of the forewing, which bears a passing resemblance to a snake’s head.
Atlas moths are predominantly tawny to maroon in color with roughly triangular, diaphanous "eyes" on both forewing and hind wing, bordered in black. The purpose of these dramatic, gossamer portals is not clear, but they are thought to play a role in predator avoidance. Their bodies are hairy and disproportionately small compared to their wings. 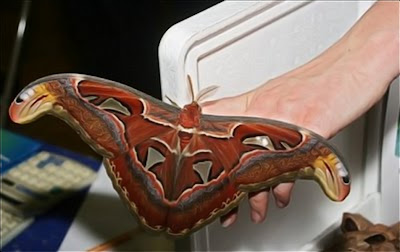 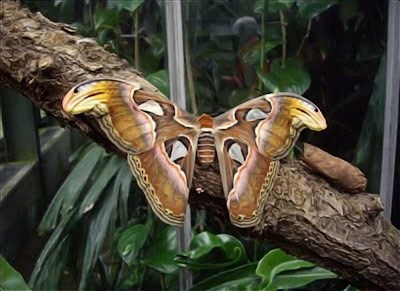 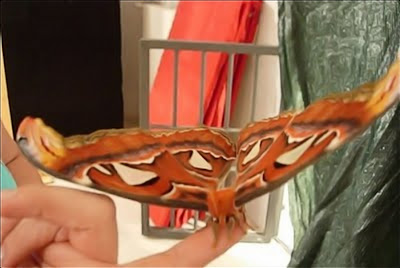 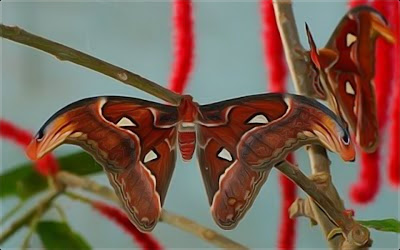 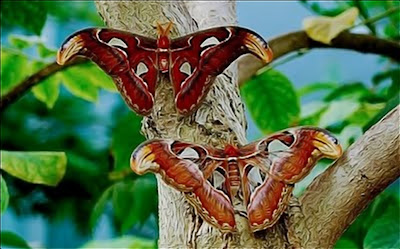