The Chinese have made a 2.5-kilometer noodles 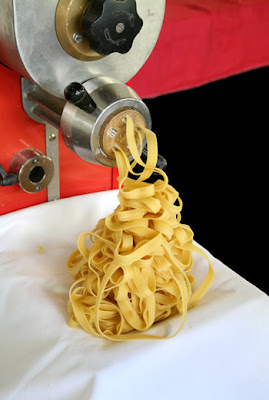 Chinese craftsmen once again proved that in the Celestial know how to cook like an unusual food. At this time the cook of the Chinese district Mencius cooked noodles, the length of which amounted to 2568 m. The creation of this "giant" has been expended 1.8 tons of rice flour.

Noodles already made to the Guinness Book of Records, was produced in honor of the local culinary festival, designed to attract tourists.

According the Chinese historians, the very first noodles was also made in China 4 thousand years ago. In the course of excavations on the site of ancient settlement Latszya in the Yellow River delta was found tightly closed pot with the remnants of noodle, very similar to common noodles "lamyan. And only after many centuries, this dish has got to Italy, and brought him there, most likely, traveler Macro Polo.

Noodles in China belongs to the category "chzhushi" - "primary food", along with rice, steamed donuts-mantou and dumplings. The rest of the meal is considered the Chinese "Fushi" - "secondary" or "supportive".