The 15 Greatest Board Games of All Time Beyond Monopoly

Most people find board games to be a boring pursuit, especially when compared with the vast array of multimedia entertainment available today. Board games actually have a ton to offer however, especially when you get beyond the board games that everyone is used to playing from childhood. Most board games (like Monopoly) we are familiar with rely far too heavily on luck instead of skill, and many have other marks against them as well, such as a far too long playing time or rulesets that make it clear from fairly early who is going to win. Here are fifteen of the greatest board games of all time; while they aren't all flawless we feel like they are vastly superior to traditional board games. Give one of them a shot next time your family or friends congregate and we think you will agree.
15. Say Anything 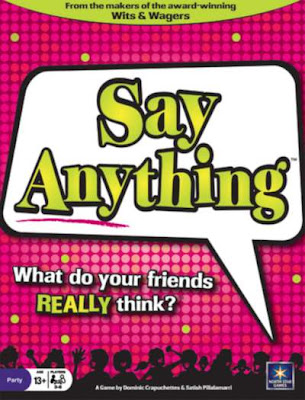 Published:2008
Suggested Number of Players: Best when played with 6,7 or 8 players
Premise: This is your chance to tell friends and family all your deep dark secrets. Well...maybe not all your secrets. Say Anything asks you questions ranging from what's the best activity for a first date to the strangest thing you ever said to your mom. Other players then place their answers face-up in a pile and place a bet on which answer you'll pick. From the makers of Wits and Wagers but with a lighter fun feel.
14. Last Night on Earth: Zombie Game 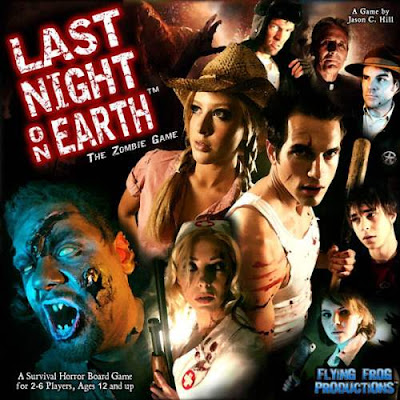 Published:2007
Suggested Number of Players: Best with 5 players
Premise:This zombie thriller is a game for more than just zombie lovers. Last Night on Earth is essentially a survival game. Participants can play as either the "Hero" team or the "Zombie" team. The objective is for one team to complete their "scenario objective", thus defeating the opposite team. The game is designed to have a horror movie feel, and even comes with it's own soundtrack!
13. Time's Up

Published:2000
Suggested Number of Players: Best when played with 6 players
Premise: Time's up is a an especially good group game. Splitting up in teams, players will play 3 rounds. The first round, describe your clue with any words. Round two, players can only use one word to describe the clue and round 3 no words, only gestures. Answer as many as you can correctly in the allotted time and you win the round.
12. Dominion 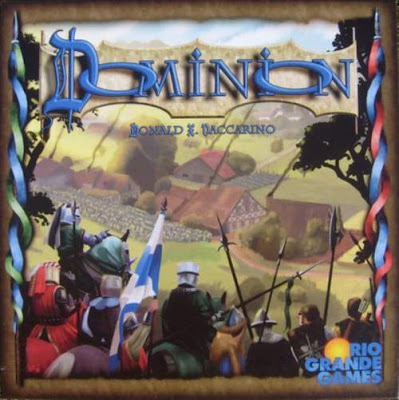 Published:2008
Suggested Number of Players: Best when played with 3 players
Premise: Each player stars with an identical number of cards..these cards unlock your future. Your goal, to add to your land, wealth and territory by buying, selling or trading whatever you can. This game will allow you to add to your castle, buy slaves and even pick out bodies of water to add to your territory. You must claw your way past the other monarchs and be the most superior.
11. Who, What, Where 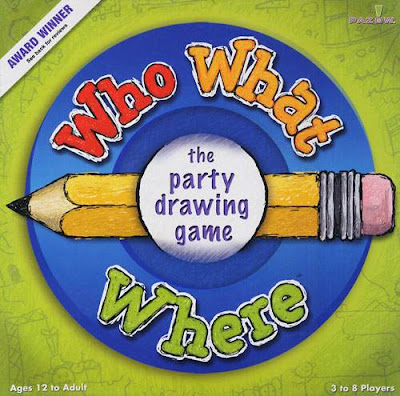 Published:2003
Suggested Number of Players:3-10, but best when played with 5-6
Premise:Who, What, Where? is a drawing board game, where other players are to guess the "who, what, and where" that the illustrator has drawn. Each player draws a card from each category and begins drawing the situation. (Johnny Cash, eating ice cream, at the bank for one oddball instance). Players will then pass their drawings, allowing the other participants to guess the who what and where! Players are awarded points for not only guessing other participants picture correctly, but when their pictures are guessed by other players. You might think initially that a lack of drawing ability might dampen the fun, but you'd be wrong.
10. Go 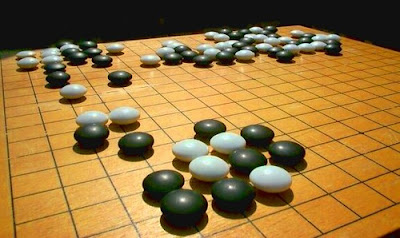 Published: Originated in China more than 2,500 years ago
Suggested Number of Players: Best when played with 2 players
Premise: Any game created from the "Analects" of Confucius has to be a challenge. 2 players take turns placing stones on a 19 x 19 grid board. The players are attempting to claim territory by walling off sections of the board and surrounding each others stones. The game doesn't end until the board fills up, or, more often, when both players agree to end it, at which time whoever controls the most territory wins. A very cerebral game that will appeal to people who also enjoy chess.
9. Pandemic 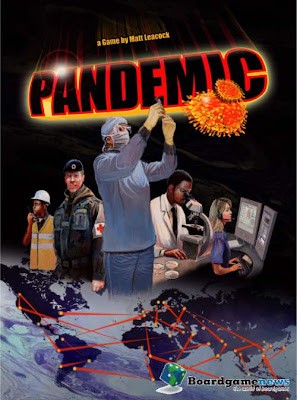 Published:2008
Suggested Number of Players:Best with 4 Players
Premise: An interesting brand of game in that it is co-operative, Pandemic is best played with 4 players. Each player can participate as one of 5 possible specialties, a dispatcher, a medic, a scientist, a researcher or an operations expert. The goal is that through a cooperative effort, the players can discover cure to four diseases before any game-losing conditions occur!
8. Apples to Apples 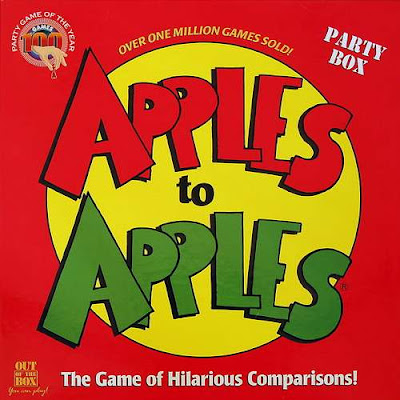 Published:1999
Suggested Number of Players: Best when played with 6,7 or 8 players
Premise: Taking two decks of cards, Things and Descriptions can lead to an evening of humor. Turn by turn the group pulls from the cards in their hand to match-up and best describe the thing. The key to winning this game, know the sense of humors of the people you are playing with. Also alcohol, lots and lots of alcohol.
7. Steam 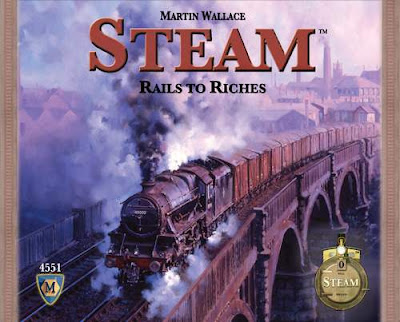 Published:2009
Suggested Number of Players: Best when played with 4 or 5 players
Premise: Based on the steel cities like Cincinnati, Pittsburgh, Chicago and others you can make money quickly on the railroad. Steam is an updated version of Age of Steam, adding new twists to building your tracks and adding new enhancements to your trading and shipping deadlines. This is a cut-throat evening for the wanna be railroad tycoons in your family.
6. The Settlers of Catan 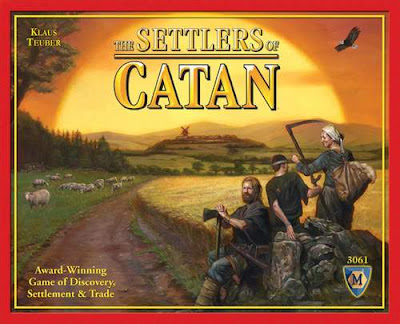 Published:1995
Suggested Number of Players:3-4
Premise:The Settlers of Catan is a multi-player board game, best suited for family play, due to the fact that no players are eliminated! The goal of the game is to score 10 victory points in one's turn. Players can collect and trade resource cards. The premise of the game is building a civilization on the island of Catan, but the game offers several opportunities for participants to take the lead. This is an excellent entry into more in depth board games. Offers lot of hilarity as you get to hear people asking if anyone has any wood for sheep.
5. Agricola 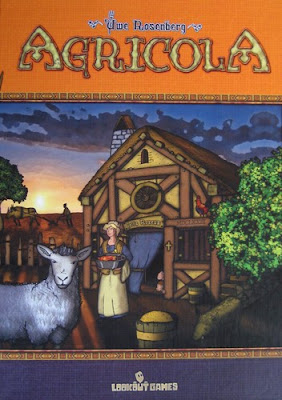 Published:2007
Suggested Number of Players: Best when played with 3 or 4 players
Premise: In Agricola, you are a farmer with a spouse and a mud shack...you have to build your life from there. Turn by turn you farm for crops, add to your family with children to help on the farm, or perform odd jobs. You can choose to build your own empire or destroy your neighbors.
4. Wits and Wagers 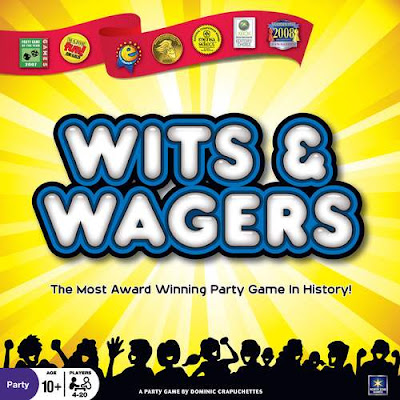 Published:2005
Suggested Number of Players:Best with 6-7, but up to 21 players
Premise:Played in seven rounds, Wits and Wagers is a numerical trivia game. One question is asked each round, and each player gives a numerical response to each trivia questions. Bets are made on the correct answer simultaneously, as well as answers being revealed at the same time. The players choose the correct answer based on the odds represented on the boards. The participant with the most chips after seven rounds wins the game. This is another one where playing a little tipsy will increase the fun factor.
3. Ca$h 'n Gun$ 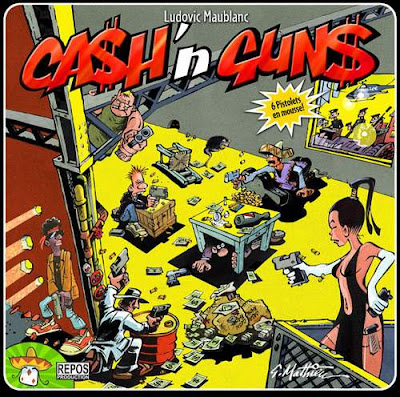 Published:2005
Suggested Number of Players: Best when played with 6 players
Premise: Your object is to be the richest gangsta. A gang of thieves is splitting up their loot in an abandon warehouse but like any split, there's never a fair solution. Fight your way to the most wealth, stealing, bribing and maybe flashing your guns. Game includes gun cards, wound and shame markers. Ca$h 'n Gun$ will help you live out all your mafia fantasies.
2. Puerto Rico 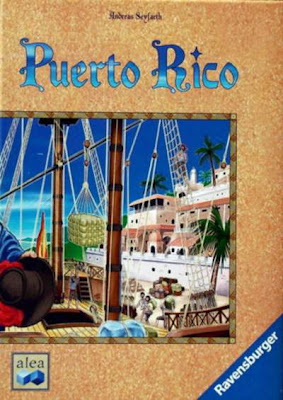 Published:2002
Suggested Number of Players:Best when played with 4 players
Premise: The main goal of this German game is to collect victory points by shipping goods to the "Old World" and constructing buildings. Puerto Rico, which is best played with 3-5 players, focuses on building your own properties up and allows each player to choose a different role (settler, builder, mayor, captain, craftsman, trader, or prospector). The game can end several different ways, when either there aren't enough colonists to replenish populations, when victory points have depleted, or when one player builds in all 12 spots in his city.
1. Ticket to Ride 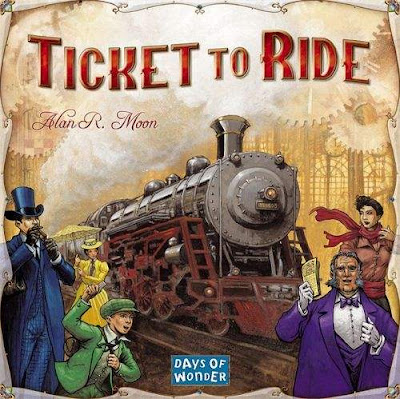 Published:2004
Suggested Number of Players:2-5
Premise:One of the most popular new board games, Ticket to Ride is a railway-themed German style board game. Each player chooses different destination cards, thus creating their goal for the end of the game. Players attempt to connect their different destinations, collecting different cards as they go, which determine the value and longevity of each train "route". The game ends when a player exhausts all of their train pieces, although every player plays one turn afterward. The winner is determined by who has the most completed railway routes by the end. A very in depth game that is as much fun with two players as it is with the maximum of five, and although any number of these fifteen could have been our top spot we feel comfortable calling Ticket to Ride our favorite board game of all time.