Are men more romantic than women?

Why men are more romantic than women
Wives are likelier to see their marriage in practical terms, one expert finds. 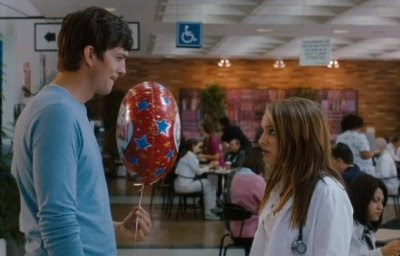 In a scene from the new movie, "No Strings Attached," a young woman chastises a man for breaking their no-romance code by showing up at her work with a balloon. Uncontrollable urges of chivalry? Sounds like a romantic comedy myth, but it's not.
“Men are typically more romantic than women,” says Dr. Terri Orbuch, a social psychologist who has spent the last 24 years studying 373 married couples. In interviewing spouses, she discovered husbands were more likely to describe their wives in traditional romantic terms, while wives spoke more practically about their relationships. “When we asked married men to talk about how they met their wives, their stories had more romantic flavor,” explains Orbuch, who details her findings in the book 5 Simple Steps to Take Your Marriage from Good to Great. “They talk about being smitten, falling hard; they also use terms like 'soul-mate' and 'love at first sight'," she says. "In contrast, wives talked about being very cautious of their partner when they first got together and guarding themselves from getting too close early on."
While romantic gestures may vary between couples, Orbuch's research suggests that men are more likely to uphold fairy tale beliefs (i.e. happily ever after) than women.  Her research is virtually identical to the results of a survey of 21,000 men and women by the psychological testing site Queendom. In response to questions on love, men were slightly more romantic in their description, using expressions women avoided, like "destiny" and "love conquers all". "Most men have an unappreciated romantic streak," said study leader Ilona Jerabek, PhD, in a statement. "You just need to understand where they are coming from to appreciate it."
Where they’re coming from is another culture. In the guy code, compliments are harder to come by and conversations about deep emotions aren’t as widely accepted. “Men don’t get the same amount of affirmations as women from their friends and family,” explains Orbuch. “They rely on the positive feedback they get in their relationship for their overall mental well-being.” One study by a Wake Forest Psychology professor even suggested men feel physically better when they're in a relationship. That may explain why men may embrace their partners as soul-mates—they satisfy a unique emotional and physical need that's harder for them to come by.
Another theory is that men are more prone to love at first site and falling fast because their brains are hard-wired to have stronger reactions to certain visual cues. In MRI scans, women showed less activation than men in the area of the brain that controls emotions when shown the same visual cues. In other words, when women see something they like, they proceed with more caution. In love song terms, if men are singing James Brown's "I Feel Good," women are singing Whitney Houston's "How Will I Know?"
But if men are so romantic, how come they've gotten such a bum rap?  It may all boil down to a misunderstanding. “Women relate to words, so they want to hear men say how they feel over and over,” says Orbuch.  “Men relate to behaviors, so they're more likely to show their feelings through actions. In the end, there’s a mismatch between the two.” To remedy this, Orbuch suggests couples come to an understanding about their own gender limitations and needs. Women may say 'I love you,' but men may express those three words with simple actions like filling the car up with gas or driving out of their way to pick a woman up. Reading between the lines can simmer arguments or feelings of neglect.
Of course, not all men, or relationships, are alike. "It's important to know what your personal romantic needs are," says Orbuch. Her six-question self-assessment test is a good starting place to measure your own RQ, or romantic quotient.
Question 1: True / False -- I believe in love at first sight.
Question 2: True / False -- I fall in love easily, and when I do, I fall hard.
Question 3: True / False -- I believe there is a perfect soul-mate out there somewhere for me.
Question 4: True / False -- If I don't have passionate feelings for someone right away, chances are s/he's not "the one."
Question 5: True / False -- No matter what challenges life presents, love can conquer all.
Question 6: True / False -- When you're truly in love, passion never fades; it can last forever.