Picture: New York Post's brilliant 'Return of the Jet-I' cover
The New England Patriots have won every off-field battle with the New York Jets this week. Bill Belichick played it cool while Rex Ryan ranted, Tom Brady(notes) looked classy in light of Antonio Cromartie's(notes) profanity, and Wes Welker(notes) managed to make fun of the Jets' coach for an entire press conference without once saying his name.
[Rewind: Philly paper's controversial Vick headline]
But while the Jets may be losing the battle of the press conferences, the New York media is picking up the slack in the war of the front pages. Witness the New York Post's brilliant (yes, brilliant) Return of the Jet-I cover, which fronted a 16-page pullout section of Friday's edition: 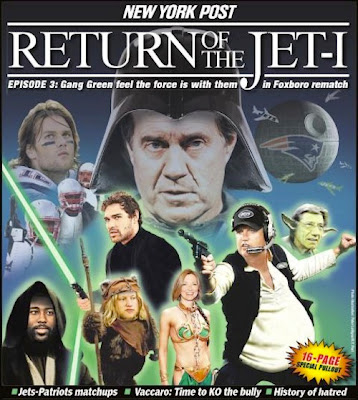 I know as much about "Star Wars" as Antonio Cromartie does about family planning, but here's the list of players-turned-characters:

(clockwise from center)
-- Bill Belichick as Darth Vader
-- Patriots logo as the Death Star (with Jets' planes crashing into it)
-- Joe Namath as Yoda
-- Rex Ryan as Han Solo
-- Michele Ryan as Princess Leia (in her infamous slave outfit)
-- Mark Sanchez(notes) as Luke Skywalker
-- Nick Mangold(notes) as an Ewok
-- Darelle Revis as Obi-Wan Kenobi
-- Various Patriots players as stormtroopers
-- Tom Brady as ... Tom Brady? (How did they miss the opportunity to turn he and his flowing mane into Chewbacca?)