In recent years, though, the prevalence of the super-hero in Hollywood has led to more and more costumes being produced that tie into our favorite comics and cartoons, and that means costumes like Sexy Wolverine are now available to purchase.
And belive it or not, they only get more ridiculous from there. That's why today, we picked out 15 of the coolest super-hero female costumes to see how they stack up against the originals that inspired them! 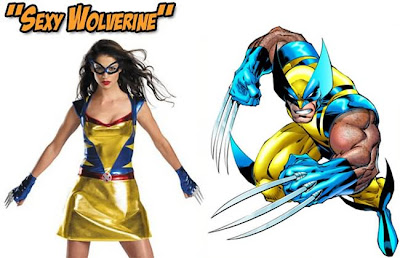 Like a lot of people, I'd always assumed that X-23, the clone of Wolverine, was created to give guys who were confused about their feelings for Wolverine a slightly more acceptable-to-them target to pin their affections on, but the costume department has straight up cut out the middleman on this one. And while I do think those gloves are pretty boss, I'm very disappointed that they didn't include my favorite part of Wolverine's look, the mask that looks exactly like his hair. But Sexy Bumblebee?! You're going to pick two and only two Transformers, and you use the second slot for Bumblebee? Don't get me wrong, I actually kinda like this one - I can't quite put my finger on why, but it's pretty cute, even though it should totally come with gigantic Volkswagen-hood slippers to tromp around in all night - but aren't there other characters that would make way more sense? At the very least, you'd think we'd be getting Sexy Megatron. 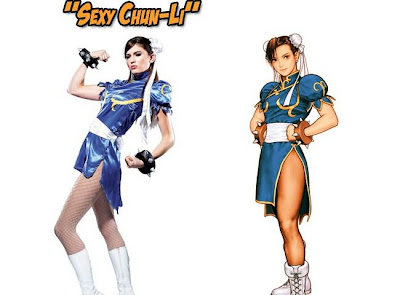 Ah, that's better. I think this one's actually pretty great, and is about as close to accurate as you're likely to get from a store-bought costume. But in the interest of full disclosure, I feel I should point out that Street Fighter II came out right when I was hitting puberty, and I've totally had a thing for comically over-sized spiked bracelets ever since. I make no apologies. 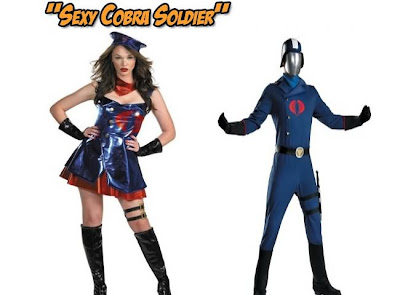 I'm not gonna lie, folks, I love the sexy Cobra Soldier costume. For one thing, and I know this is going to sound crazy, it's got an amazing touch of accuracy, it even includes the straps that hold the dagger on the left leg!
For another, in the G.I. Joe episode "The Viper Is Coming", in which 22 minutes are devoted to setting up a groaner of a joke that was old even for the target audience of impressionable toy-buying youngsters, the team discovers a massive cobra vacation center in which a dance troupe called the Cobra Cuties performs nightly. Sadly, the Cobra Cuties are never brought up again, but if they had been, I like to think that's exactly how they'd look.
And yes, I just validated the existence of a truly insane Sexy Cobra Soldier costume with my in-depth knowledge of cartoons. That's just how I roll. 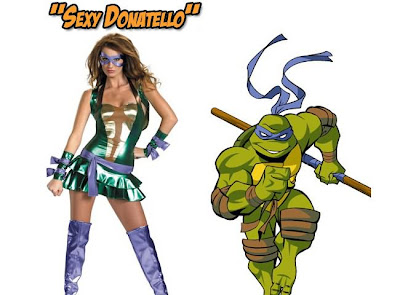 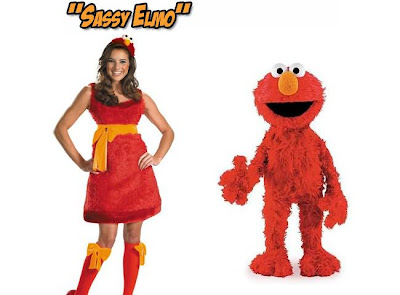 Yes, I know: This has nothing to do with comics. But a sexy version of Elmo is the kind of thing that when you see it, you have to tell someone else, or it'll just sit there in your brain slowly driving you insane as you try to figure out why it exists.
Even so, if you take away the hat, which totally makes it look like this girl defeated Elmo in ritual combat and is wearing his skin as a trophy, this would make a pretty good costume for Sexy My Grandparent's Couch. 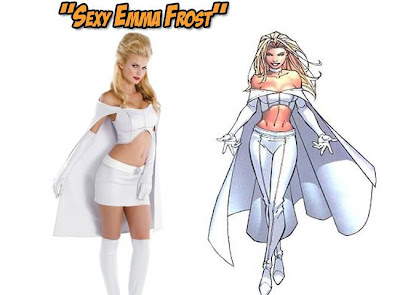 Yeah, that's about right. OK, you could call this one out for going with a skirt rather than the pants, but considering Emma Frost's original costume was a corset, panties, thigh-high boots and a cape, that's not really out of character for her. I'm more concerned about the hair going on there. Has Emma joined a 60s girl group? Actually, that would be awesome. 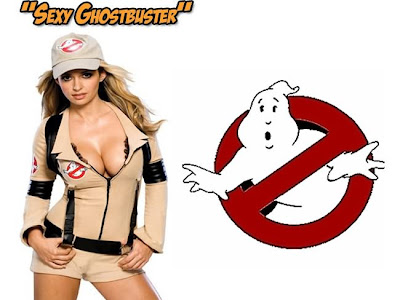 I'm not trying to brag here, folks, but I've seen Ghostbusters a pretty good amount of times, and I can assure you that I have no memory of this costume appearing in the film. Admittedly, there's a good chance I would've blocked it out had Dan Aykroyd actually squeezed into a push-up top and a pair of booty shorts and ... oh God, now I'm imagining that. MOVE ON!!! 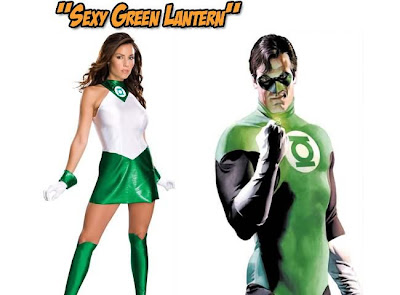 I've got to say, this is actually a pretty dead-on costume for Green Lantern Arisia that, if anything, is actually more modest than its comic-book counterpart, since it lacks the plunging neckline of the original. I wish there was something to make a joke about it, but there isn't. This is a totally accurate costume for anyone who wants to dress up as an underage alien who wanted to get it on with Hal Jordan, and thus used her power ring to give herself a more womanly figure and a sexier outfit, but was later retconned into actually being like 240 years old so that people would stop thinking Hal was such a creep, even though she was still the equivalent of around thirteen at the time. Nothing weird or sketchy about that. 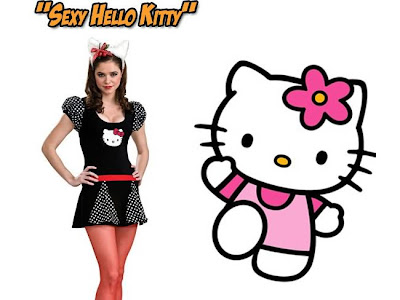 Oh now come on. This alleged Hello Kitty is essentially the Sexy Lady version of the crappy costumes you used to get from the grocery store back when I was growing up, right down to the fact that it's got Hello Kitty's face right where it would be on a plastic smock back in the day. And get real, lady, your bow's on the wrong side. 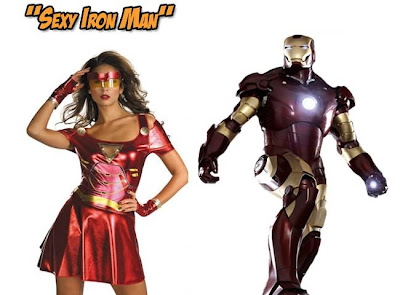 Once again, this one's billed as being an "Ironette", but since it doesn't look anything at all like Tony Stark's squadron of personal cheerleaders, I'm making a judgment call and saying this is totally meant to be a lady version of Iron Man. And aside from, you know, the fact that's "for women" automatically equals "pleated skirt", that's actually pretty cool. 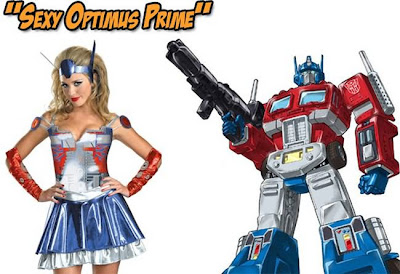 Yes, I'm aware that they're based on the movie and not the cartoon. Sexy Optimus Prime, in which a robot that can turn into a truck is screenprinted onto a flimsy top in such a way that the windshield (and if you look closely, wipers) are right over the breasts. And that's more or less where any attempt at accuracy both starts and ends. Plus, this thing might as well come with a warning that some dude with the scent of spiked punch on his breath is definitely going to offer you his Rodimus. 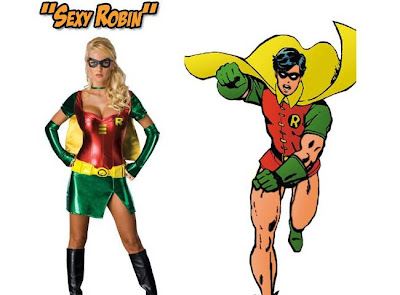 You'd think if they were going to make a ladies version of a Robin costume, they would've based it on one actually worn by a female Robin, as seen during Stephanie Brown's extremely brief tenure as Batman's sidekick. Instead, the color scheme and the design of the utility belt give me the idea that it's based more on Robin's look in the Teen Titans cartoon. So if you're looking for a slightly off-model Sexy Robin costume that can double as a slightly off-model Krissy Lynn costume, here you go!
It's a shame, too, because turning the red tunic into a minidress and accessorizing it with green leggings while keeping the same basic deisgn and black/yellow cape that Tim Drake wore is a really nice way of making it distinctly feminine without being "girly". What? You think I spent all these years reading Batman comics and never thought about the fashion? 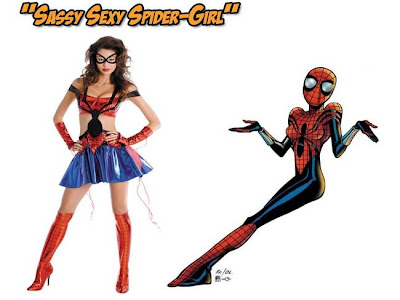 You know how I know that the costume people didn't actually know what Spider-Girl looked like? Because this is the costume they came up with to represent her. I will admit, though, using May Parker's bigger spider-emblem to make the straps for the top is actually pretty clever. It just happens to be a clever idea on a costume so ridiculous that even the drawing of Spider-Girl up there is shrugging in disbelief. 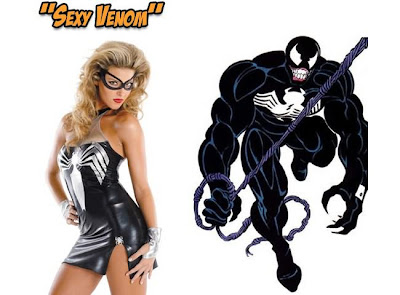 This costume's actually billed as being "Sexy Black Costume Spider-Girl", but I'm pretty sure whatever branch of Marvel it was that licensed this thing only had the vaguest idea that they did in fact own a character called "Spider-Girl" so I'm calling it as Venom. After all, that gives you an iron-clad defense against allegations of inaccuracy, as the Venom symbiote can look ilke anything! And if I had to wear it, I'd certainly change it to ... well, not a mini-dress. Don't get me wrong, I like the little spider at the hip, I just don't have the legs for it :)