First Look At The New Spider-Man

Ever since word of a "Spider-Man" reboot was announced, fans have been hungry for any scrap of info about the movie. How will this version differ from Sam Raimi’s hugely successful franchise? How will Andrew Garfield's Peter Parker stack up against Toby Maguire's? Today, we get an early look at the upcoming flick. Check out the pic below. 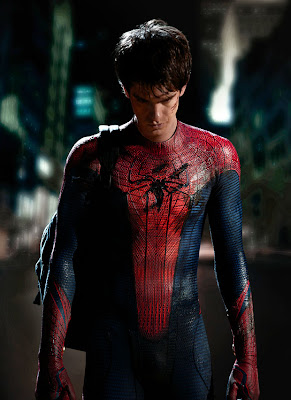 The photo, the first released from the movie, shows Parker in Spider-Man's iconic red and blue suit sans mask. His face has been scuffed up and his suit, which is more textured and less sculpted than in Spidey's previous incarnation, looks a bit worse for wear.
I see it as a massive challenge in many ways," he told Details magazine. "To make it authentic. To make the character live and breathe in a new way. The audience already has a relationship with many different incarnations of the character. I do, as well. I'm probably going to be the guy in the movie theater shouting abuse at myself. But I have to let that go. No turning back. And I wouldn't want to.